TECH SUPPORT INFO
Do not hesitate to contact me if you have a question or a problem. You may find the Tech Support Articles below helpful for many common issues.

TECH ARTICLES
PERFORMING INDOOR TRIAL RUN
The following assumes the DewBuster™ Controller is working properly, if not see Troubleshooting Problems.
The following will familiarize you with your DewBuster™ Controller prior to the first night under the stars. This can be done indoors with the telescope laying on a table or outdoors while waiting for dark.
Now try "manual control" of MEDIUM POWER outputs:

How do I check that my DewBuster™ Controller is operating properly?
If the above instructions do not produce the expected results, then contact me and include the results of the above tests.
How can I tell if the DewBuster™ Controller is maintaining the temperature where I have it set?
The Temperature Controlled output's red LED blinks when the telescope is at the set temperature. If LED is off that indicates telescope too warm (no power applied so telescope can cool). If LED is on constantly that indicates the telescope is too cold (full power applied to warm telescope). Under normal operation blink rate varies as controller adjusts power level to control telescope temperature and LED may even stop blinking or remain on for short periods of time. However if LED never blinks then check that Temperature Sensor is making good contact with the telescope, the Air Sensor is not touching anything, and the corrector plate (or objective) heater is plugged into the Temp Control output that the sensor is controlling.
How can I check my heater strips?
If you have a multimeter, measure the resistance of your  heaters to make sure they are not shorted or open. A 14" heater will measure about 2.5 Ohms, 8" to 12"  heaters 4 to 8 Ohms, 3" to 5" heaters 10 to 20 Ohms, and small heaters 20 to 100 Ohms. As you can see, the larger the heater the lower its resistance should be, but no heater should read less than 2 Ohms unless it has a short in it.
Now turn the DewBuster™ Controller to maximum and one at a time, plug each heater into the DewBuster™ Controller. No heater should cause the fuse to blow or cause the DewBuster™ Controller's yellow Low Battery LED to illuminate (assuming a good battery). Make sure each heater gets warm after about a minute. No matter how small a heater is, it should get warm to the touch if it is working. If you find a heater that is not working, don't throw it away, the problem is usually in the RCA plug and is very easy to repair. 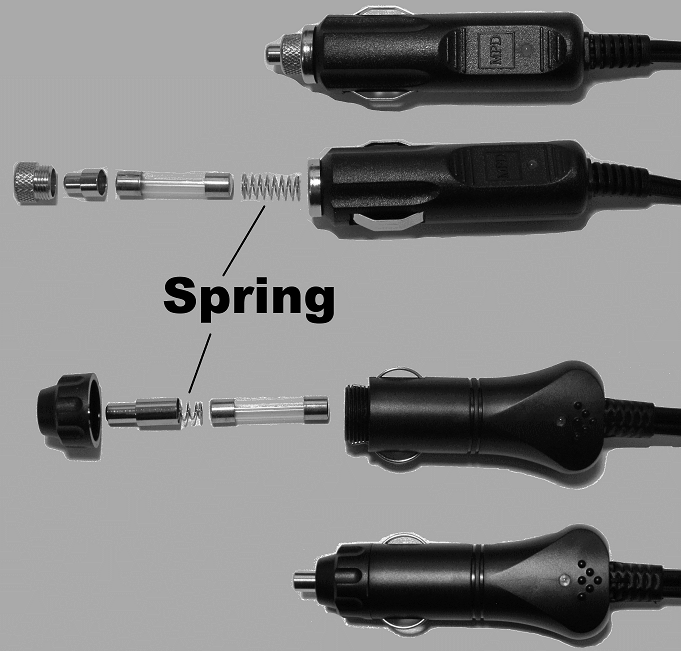 Does the DewBuster™ Controller have a fuse?
Cigarette plug models - fuse is located in the tip of the plug and if it blows the LED in plug will not illuminate (light is intended for night use and hard to see in bright ight). If LED is not lit and you are sure that the socket has power, then unscrew tip of cigarette plug and check for a blown fuse. Provided your cigarette socket can handle the current, you may use up to a 10-Amp fuse (fuses are available at any auto parts dealer). When replacing fuse, it is very important to put spring back in proper location, otherwise a poor connection will be made and the yellow Low Battery light may illuminate. There are 2 types of cigarette plugs and the spring location differs so compare your cigarette plug to the pictures above to determine spring location.

Big Dob models - there is a solid state "PTC" fuse inside the controller which never needs replacement. It self-resets when the controller is unplugged for a few minutes. The optional RCA to cigarette plug power cord will also have a fuse which is replaced as outlined above.

LOW BATTERY LIGHT WITH FULL CHARGE
The yellow LED illuminates when the voltage at the DewBuster™ Controller falls below 11.0 volts. This normally means the battery is low on charge, but poor electrical connections can cause voltage losses as electrical current travels through them resulting in a lower voltage at the DewBuster™ Controller than at the battery terminals. Normal resistance in the DewBuster™ Controller's power cord and fuse may result in as much as 1/2 volt loss, meaning the low battery light could begin to illuminate when the battery is at 11.5 volts. If you have an elaborate power setup with switches, fuses, and other connections there will be a voltage loss as current passes through each item. The higher the current the greater the voltage loss so very large heaters on a cigarette plug power cord can cause problems. If a short develops in a heater strip this will cause a large current increase and can make the Low Battery light come on (as well as run your battery down quickly). The following instructions will help you to determine where any poor connections are located as well as if you have a shorted heater drawing excessive current.
Check for a shorted heater strip as follows:

If the yellow LED did not seem to be caused by a shorted heater, then it may be that the power source, wiring, or connections are causing the problem.

Turn the control knob fully clockwise and plug in all heaters so that maximum current will flow as you take the following voltage measurements: After performing the above checks, if you have not isolated the problem, contact me with the results of the above tests and I will help you figure out the problem. Be sure to include your Serial Number as this helps me to interpret your readings.

REPAIR SHORTED HEATER
NOTE: This procedure is harmless and highly recommended to maximize the reliability of your equipment, however if your heater is under warranty this may invalidate the heater warranty.

If your dew heater does not have a metal RCA plug as shown below, then these instructions  do not apply and replacing the RCA connector will probably not fix the problem.
On some Kendrick Heaters, repeated tugging and flexing of the heater cable may cause the RCA plug connections to intermittently touch, causing a short circuit. Unscrew the barrel of the RCA plug and slide it out of the way to allow inspection of the connector:

GOOD: Heat Shrink Insulation on center terminal prevents it from touching outer terminal and keeps the terminals separated. Reassemble the connector by sliding the outer heat shrink back over the connections and screw the barrel back on. You are finished with this heater, but be sure to check your others. If the connections look like either of the photos below, then the plug can short and you should repair it as directed below.

BAD: Heat Shrink Insulation is on outside of connections so it can not keep terminals from touching together. If the heat shrink covers the terminals, slide it back to reveal the electrical connections within. 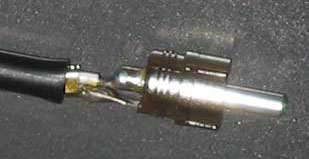 The photo above shows what is beneath the heat shrink, the terminals are almost touching and can short when the cable is flexed.

The photo above shows the RCA plug after wrapping electrical tape around the center terminal. This prevents the center terminal from coming into contact with any other parts of the plug. The outer terminal does not have to be insulated since it is connected to the plug housing anyway. If you have any questions, contact me  for assistance.

POWER CORD MODIFICATION OR REPAIR
If you need to repair, replace, or change the connector on your DewBuster™ Controller the following the information will prove helpful. And rest assured that simply modifying your power cord will not void your warranty.

EXTEND / REPAIR TEMPERATURE SENSOR CABLE
The DewBuster™ Controller's Temperature Sensor cable has a 6 foot long striped gray cable that connects to the DewBuster™ Controller via a phono plug. The temperature sensor portion should not be modified but the gray cable between the DewBuster™ Controller and temperature sensors is an ordinary 2 conductor copper wire and its length may be extended several feet by simply cutting it and soldering in an extension wire. I do not recommend extending the wire more than a few feet. The plug is a standard 3.5mm mono plug like those commonly used for earphones and is easily replaced if it becomes damaged. The gray striped wire connects to the tip of the phono plug.
After modifying or repairing the Temperature Sensor Cable, test it's operation as follows:
If you have any questions, e-mail me  for assistance.

MOISTURE ON INSIDE OF TELESCOPE
Any closed-tube telescope will have air trapped inside, and all air has some amount of moisture in it and hence a dew point. The air trapped inside will cool as the telescope cools during the night, and when it cools to its dew point temperature, moisture will begin to condense onto the interior optical surfaces. The problem is at its worst on cold winter nights because the night air temperature gets much colder than the dew point of the air inside the OTA.
How does moisture get inside your telescope?
Warm air absorbs a great deal of moisture and when that air cools down it will release the moisture as condensation. Do not uncap your telescope indoors or during the day to "dry up" the interior moisture because the warm air's dew point is well above the coldest temperature that will be reached that night. This means that when the air inside cools at night moisture will begin forming on the interior optical surfaces again.
So how can we stop moisture from forming inside the telescope on cold nights?
Instead of trying to dry the telescope during the daytime when the dew point is at its highest, do it at night when the dew point is lower. If moisture forms on the inside of the OTA at night, remove the eyepiece/diagonal and point a hair dryer toward the rear opening of the telescope so that it blows warm (not hot) air into the telescope. Do not press the hair dryer directly to the eyepiece opening, keep it several inches away so that no pressure builds up (a hair dryer will overheat if there is no air flow) and pause as needed so the rear opening won't get too hot. An SCT corrector plate has air gaps around it so the warm air will absorb moisture and escape around the corrector drying out the inside of the OTA.
For a more elegant solution than a hair dryer, the Lymax SCT Cooler circulates air through the telescope so it can be used early in the evening to cool the scope and late at night to remove any damp air. If you prefer the build-it-yourself approach, take a look at this Cloudy Nights discussion.
How do we keep moisture from getting back into the telescope?
The best way is to keep the low humidity air trapped inside the telescope by capping up the eyepiece end of the telescope before bringing it in from the cold night air. It is OK to uncap the objective lens or corrector plate, but do not uncap the eyepiece end as you do not want to let the dry air escape from the interior of the telescope.